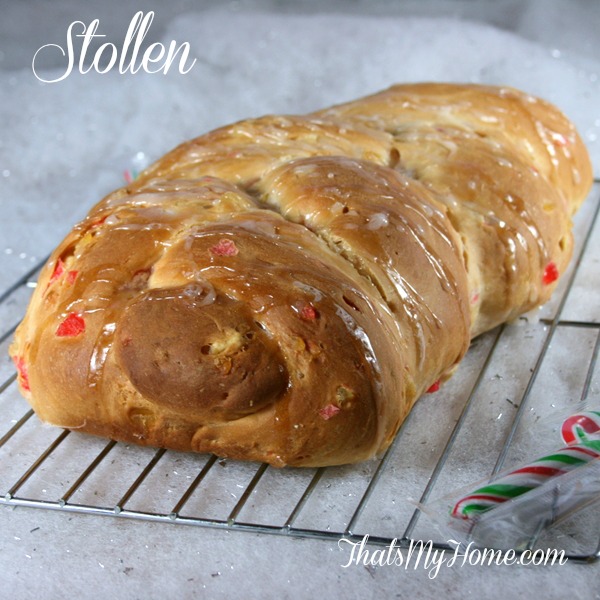 Stollen is a yeast bread that is filled with candied fruits, nuts and spices. It is so good, I could eat it year around if you could get the fruit. It is heavenly toasted too! Where I live it is usually only available now. One thing I do is when the stores clearance it after Christmas I buy it and freeze it. It freezes great and it usually is 75% of the price. My grandmother used to make a fruit bread at Christmas. It was a huge production and she made between 15 – 20 loaves. Hers had candied fruit, dates, nuts, lemonade and orange juice and lots of spices. I have tried making it now 3 times I think and it is something I totally fail at. This bread costs a lot to make and failure is just not an option so it is the one recipe I have totally given up on. Maybe one of these days I will try it again but I’ve been beat up enough with it at this point in my life.

On to this bread it works great and it is so delicious. I made up my own mixture of candied fruit and used just candied cherries, candied pineapple and a small thing of candied orange peel. I like this mixture better than the one with all of the stuff in it, but that is just my preference.

I read somewhere that too much cinnamon can kill or retard the yeast. So when I add the cinnamon it is towards the end with the flour. My grandma’s recipe has lots of cinnamon in it and I am convinced that is why I can’t get the recipe to work for me.