Rhubarb is one of my favorite fruits, only it is really a vegetable. Here in the U.S. we eat it like a fruit so a New York court  in 1947 declared it would be counted as a fruit for regulations and duties, therefore making it cheaper to be imported. Strange, right? Well those are the facts according to Wikipedia. If you are lucky enough to have your own rhubarb patch consider yourself blessed. I always took it for granted and it was just one of the first tastes of spring to me growing up in Michigan. Now that I have lived in the south for almost 10 years I feel the pain every time the season rolls around. I tried relentlessly in Alabama to grow it, I figured if they sold it then you must be able to grow it there. Wrong, it didn’t matter where I planted it I could never get it to grow. By July the heat would get to it and it would disappear. A few pieces would come up the next year but by the next year it would completely disappear. So lesson learned. I was pleasantly surprised when I went to the grocery store on Saturday night to find some beautiful, fresh rhubarb that I got enough to make a pie.

For the crust try my recipe here for lard crust, the crust for this pie was half butter, half lard. It is my new go to recipe for pie crust. I used to consider myself pie crust challenged. This recipe changed all of that, I actually love making pies now, instead of dreading them.

Sweet and tart at the same time, rhubarb pie is one of my favorite spring recipes. 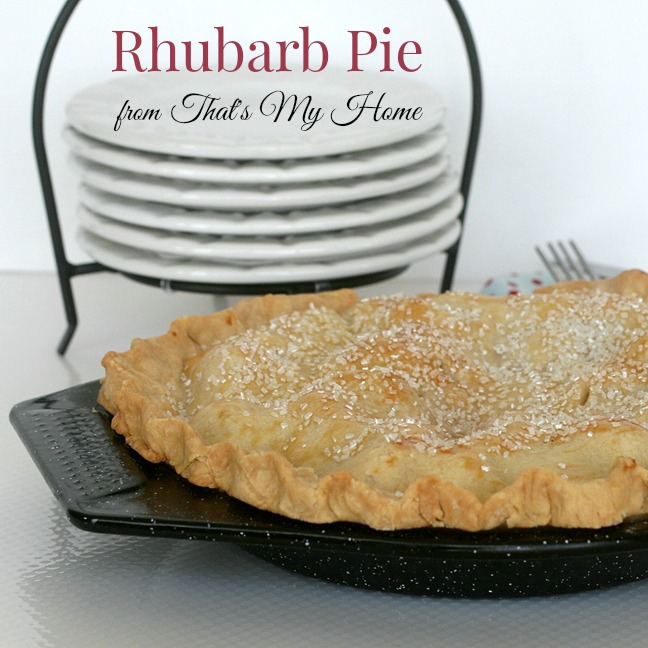